While here in Israel visiting Josh and Yoni, I participated in a day long visit with Palestinians sponsored by Encounter. Encounter’s mission is “to provide Jewish Diaspora leaders from across the religious and political spectrum with exposure to Palestinian life,” and “to create human connections across lines of enmity, and expand personal and political understanding.” Encounter is not a political organization and does not take a position on the Israeli-Palestinian conflict. Rather, they aim to create understanding if not agreement.

After a long day of conversation, it’s clear that the Israelis and the Palestinians each have conflicting truths and conflicting narratives of the conflict they have endured for decades. Any chance of resolving the conflict requires these narratives to be set aside and both sides to pay attention to the needs and concerns of the other. It’s also clear that there’s no easy solution. Having listened to six Palestinians offer their insights, I am left with feelings of both fear and hope. I fear that the conflict can’t, and won’t, be resolved anytime in the foreseeable future, and I hope that both parties will find the courage, and identify the leadership necessary, to move toward reconciliation. What follows is a summary of what I heard today in Bethlehem.

After an orientation at a local hotel here in Jerusalem, the group I was a part of traveled by bus to the Bethlehem region, to the home of Ali Abu Awwad. Ali runs an organization called Jubur-Roots, whose mission is to develop and empower non-violent leadership in the Palestinian community. Ali, a man in his late forties, was raised in a politically active family with strong ties to the PLO and, as a younger man, was personally involved in what he calls “resistance against the Israeli occupation.” He was arrested and imprisoned, though he did not elaborate on exactly what he did to get arrested. Did he throw a rock or a Molotov cocktail at a tank, or did he participate in a kidnapping or killing? Ali was never able to imagine the pain of Israelis who were victims of Palestinian violence. However, after he met and talked with Israelis who had lost someone to the conflict, he founded Jubur-Roots and today works to build a movement of Palestinians who seek a non-violent approach to conflict resolution. 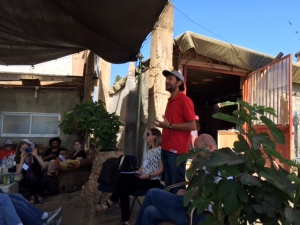 Ali sponsors regular dialogue with settlers and seeks to foster a deeper understanding of each side’s pain and fear. Through dialogue he hopes to lower the volume on what he calls “the security myth” and build a shared vision of what justice would look like in this region. He talks openly about the corrosive effect of occupation on both sides. He told a story about waiting for two hours to get home at a check point in the West Bank during a cold and driving rain. When he finally reached the check point, Ali relates that the soldier asked him, in a tone he regarded as sarcastic and cynical, “How are you?” Ali answered, “I’m fine. Not only am I dry and warm inside my car, but soon I’ll be home with my family and you will still be standing here at this check point making all these people suffer.” Ali suggested that his response to the soldier put a human face on the ugly routine of making people wait countless hours through check points, and he spoke of the need to understand each other’s suffering. Ali acknowledges that the Palestinian community also suffers because of internal divisiveness, political corruption, and a great divide between the idealism of non-violence and the reality of incompetent political leadership.

Hamed Qawasmeh, originally from Hebron and raised in Kuwait, today lives in Hebron. He earned a Master’s degree in political science at Idaho State University and a Master’s in Business Administration at Bar Ilan in Israel. Hamed works for the UN Office of the High Commissioner on Human Rights and is an active member of the Israeli-Palestinian Villages Group. Hamed talks about how the area in which a Palestinian state could be developed is rapidly shrinking due to the creation of military zones and nature reserves, closures that create isolated pockets of habitation, the denial of building permits and the threat of demolitions, and the pathway taken through Palestinian villages by the separation barrier. Using maps and statistics, he makes a compelling case that the current approach is rapidly making an independent Palestinian state impossible. But Hamed’s commentary seems less than objective at times. He uses phrases like “the settlement of Gilo,” referring to a thriving town on the outskirts of Jerusalem next to Bethlehem that, by all accounts, would remain part of Israel in any future agreement. He speaks cynically about how the Israelis restrict Palestinian access to water resources, depicting the Israelis as lacking compassion and creating a desperate situation that chokes off agriculture and normal living standards, but there is a sense that his take on the matter is quite one-sided. When asked to explain the fact that violent attacks against Israelis by Palestinians decreased dramatically after the creation of the separation barrier, Hamed answers that the drop in violence resulted not from the wall but from a new attitude among Palestinians that violence is not an acceptable pathway to take. When asked why the population of Christians has decreased in Bethlehem, Hamed answers that Christians were not persecuted by Muslims and forced to leave, but made a choice to leave seeking better economic opportunities in other countries.

Hamed was asked if he blamed the Palestinian political leadership, specifically Yasser Arafat, for turning down the offer made by the Israelis 15 years ago to establish a Palestinian state on nearly 96% of the land in the West Bank in a deal that did not include Palestinian sovereignty over East Jerusalem. He answered that Arafat felt he could not accept a deal that did not include Jerusalem because, not being a religious leader, he felt he was not in a position to speak on behalf of Muslims around the world. So he consulted with the president of Egypt and the King of Saudia Arabia, both of whom indicated that the deal should not be accepted. I asked Hamed if he would accept the same deal today if Israel were to make the same offer and he immediately answered that he would not, adding that any deal that does not include Jerusalem is unacceptable to Palestinians. He views negotiations based on the pre-1967 borders as representing a massive compromise on the part of the Palestinians and does not think any further compromise is called for.

I asked Hamed if he acknowledges the validity of Israeli security concerns and whether or not Israel has any reason to be concerned about relinquishing control over the West Bank. He immediately related his view that a Palestinian state would be fully capable of keeping the peace. Hamed does not believe that there will ever be an independent Palestinian state, but he greatly values the daily cooperation and support provided by the Israeli-Palestinian Villages Group through which he can bypass the bureaucracy of the military administration of the West Bank and simply obtain some of the services he needs for Palestinian villages.

Sam Bahour, a Palestinian-American business consultant who lives and works in Ramallah, spends his time helping Palestinians to develop businesses in the West Bank. He spoke openly about the destructive effect of occupation on creating a thriving economy in the West Bank, and his view that encouraging business development is a non-violent means of resistance. He feels that the occupation is like “a boot on the neck of the Palestinians.” Like Hamed, he views the Palestinian position of establishing a state based on the pre-1967 lines as a significant compromise, and cannot imagine accepting any deal that does not relinquish control of East Jerusalem, including the Temple Mount and the Kotel, to the Palestinians. I asked Sam if he felt that the sole cause of Palestinian resistance is the Israeli occupation, or if Palestinians and the Arabs reject the very idea of Zionism. He answered that, without doubt, Arabs reject the idea of Zionism, telling me that “there’s Judaism, Zionism and Israel, and there’s a reason there are three separate words used for each idea.” He claims that Zionism is an ideology which Arabs need not accept, that Judaism is a religion and that Israel is a political entity with which they must contend. 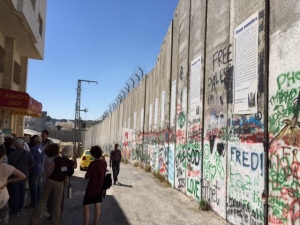 Without doubt, all of the presentations I heard on my Encounter reflected a Palestinian perspective. There was no discussion of Israel’s security, concerns that Hamas militants would rapidly supplant Fatah leadership in the West Bank in any future Palestinian state, turning the area into an armed terrorist training camp and launching pad for routine attacks against Israel. There was no mention that removing check points or the security barrier would likely result in the regular movement into Israel of terrorists wearing suicide vests with the intent of blowing up civilians going about their daily lives (despite Ali’s commitment to non-violence). There was no discussion of a Palestinian education system that teaches children that Jews are inferior to other humans and evil, the demonization of Jews in the Arab press, the glorification of violence against Israelis, or the honoring of terrorist thugs with bonuses and streets named after them.

My day long encounter with Palestinians stirred feelings of both fear and hope. The people I heard tell their stories speak of a grim reality faced by Palestinians and that the window of opportunity to change that reality is rapidly closing. The reality of a military occupation with no end in sight and continued settlement building undoubtedly have a corrosive effect on the soul of Israel and threaten the democratic nature of the state. Yet, there is hope that through grassroots dialogue the essential humanity of the Palestinians, the security needs of the State of Israel, and respect for each other’s narrative can emerge and take hold.

3 thoughts on “Fear and Hope: A Day Long Encounter with Palestinians”

Join in and leave a reply.... Cancel reply